Experience local food culture in a charming historic town known for its breweries. Get to know the small-town community with a local guide! 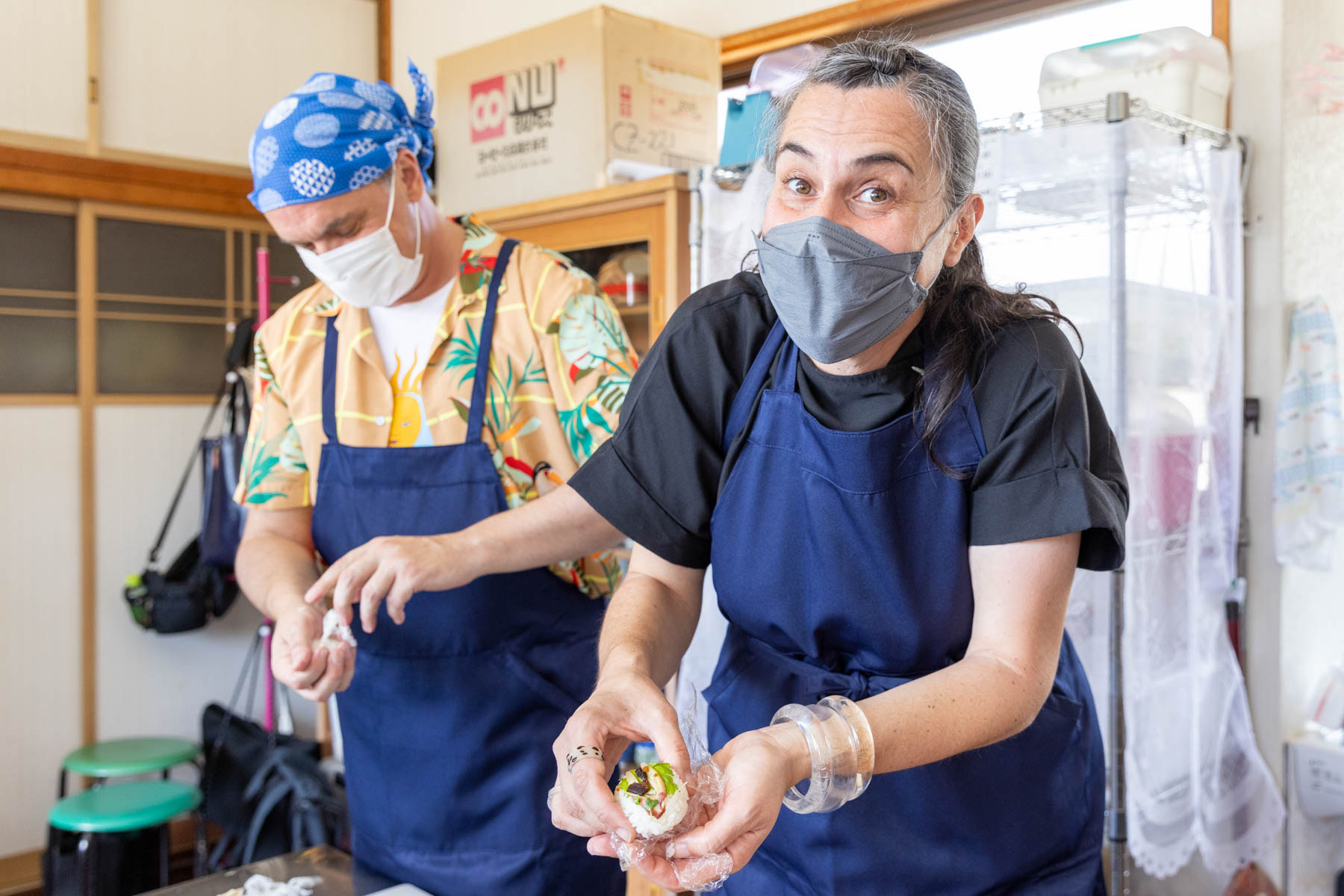 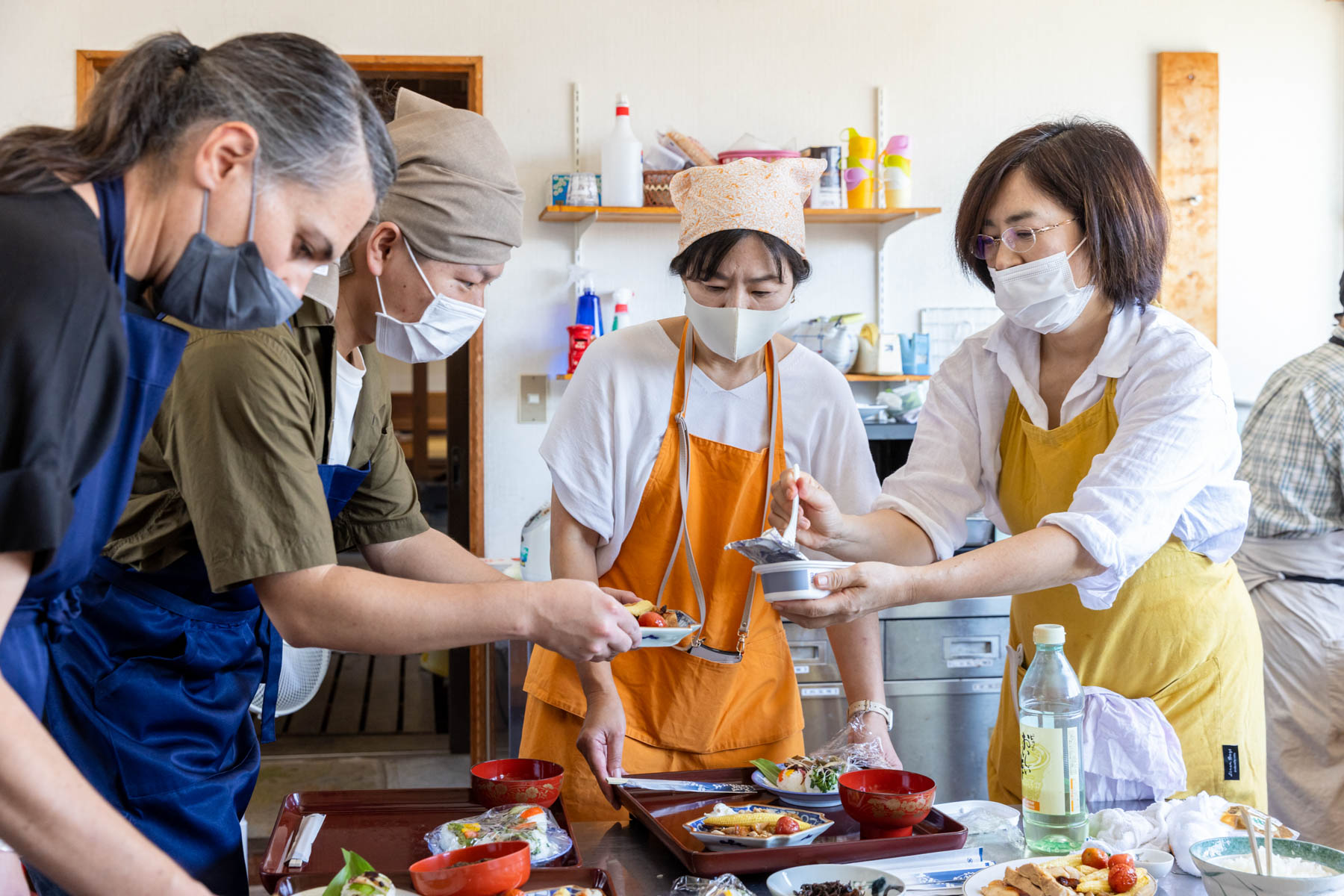 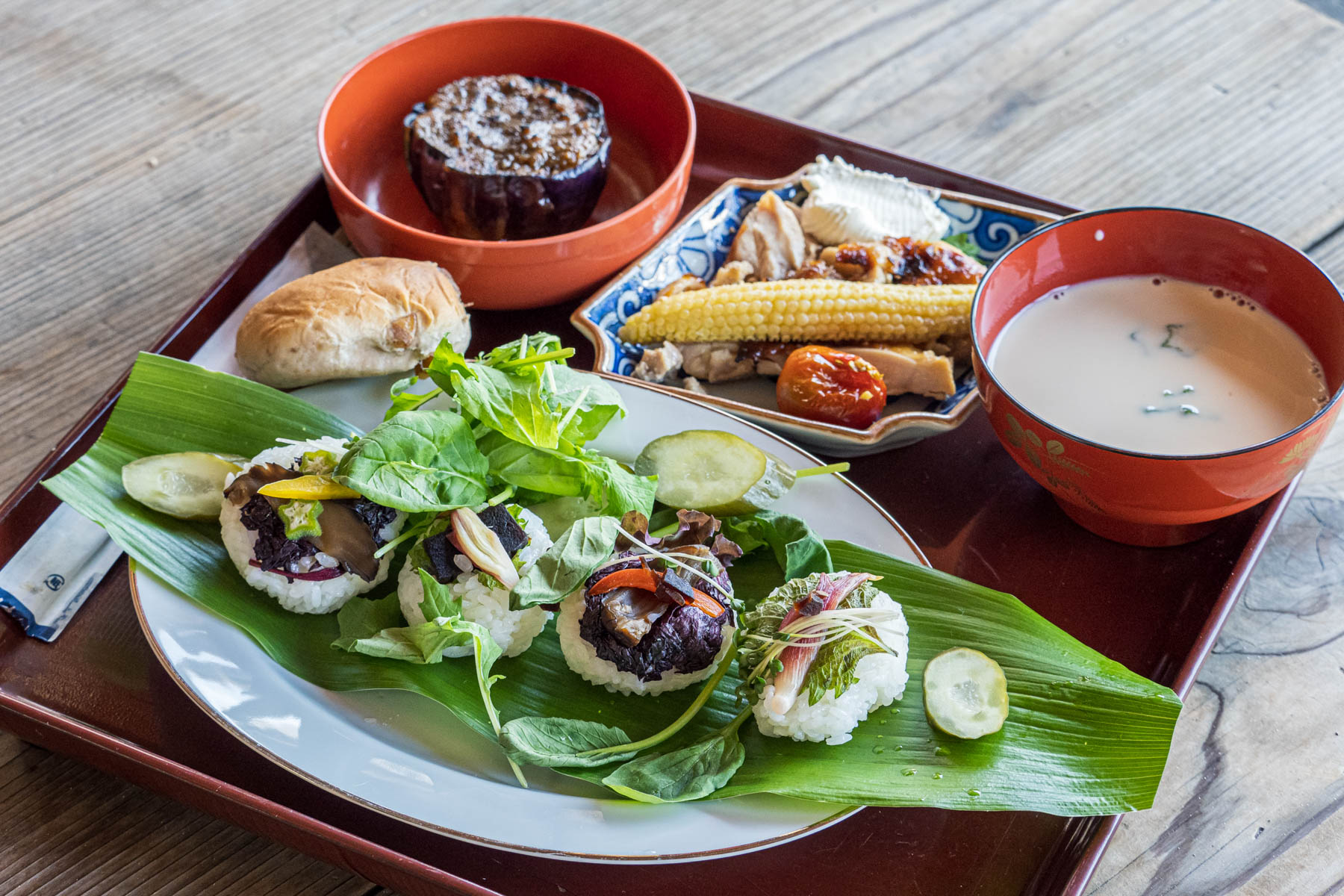 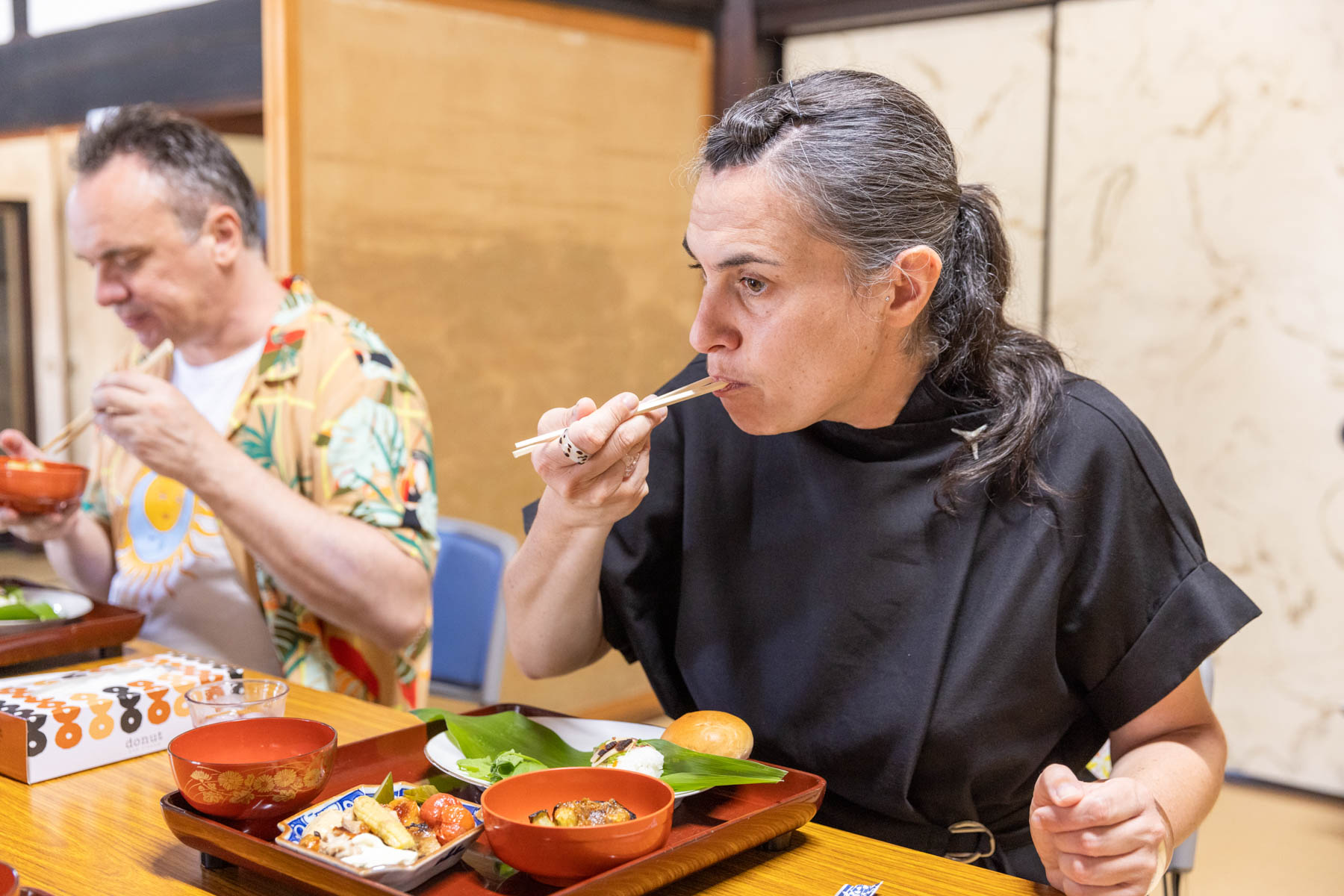 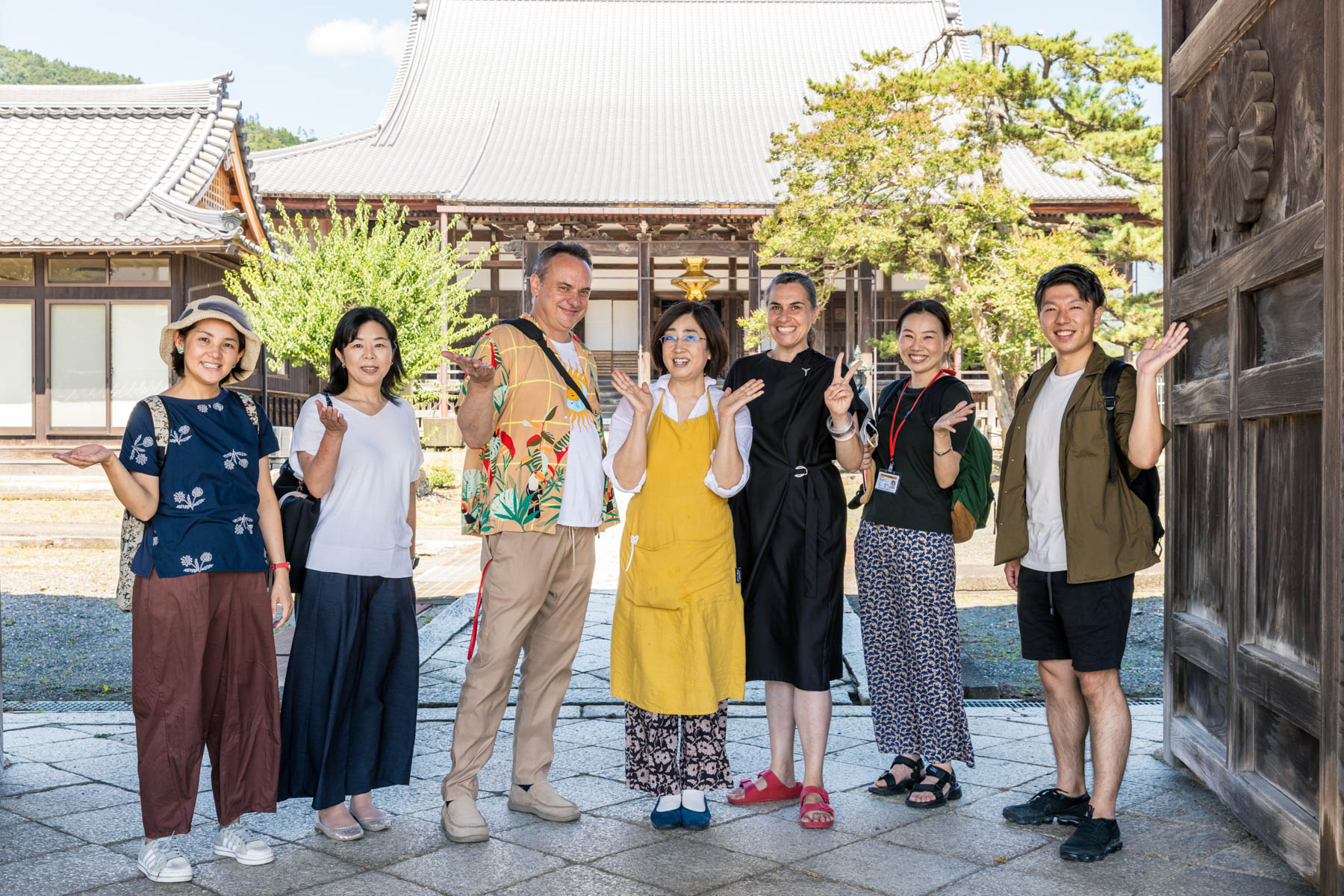 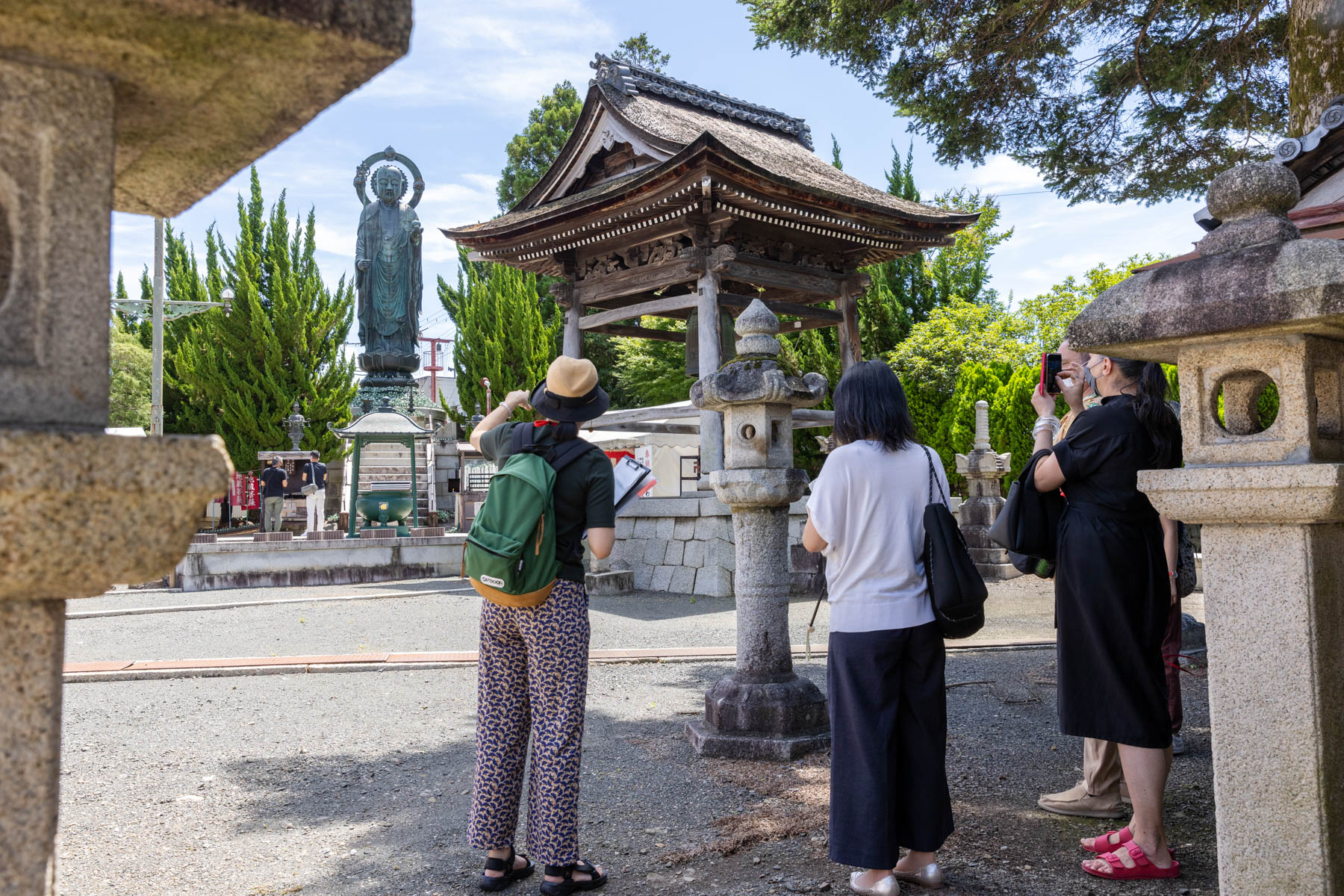 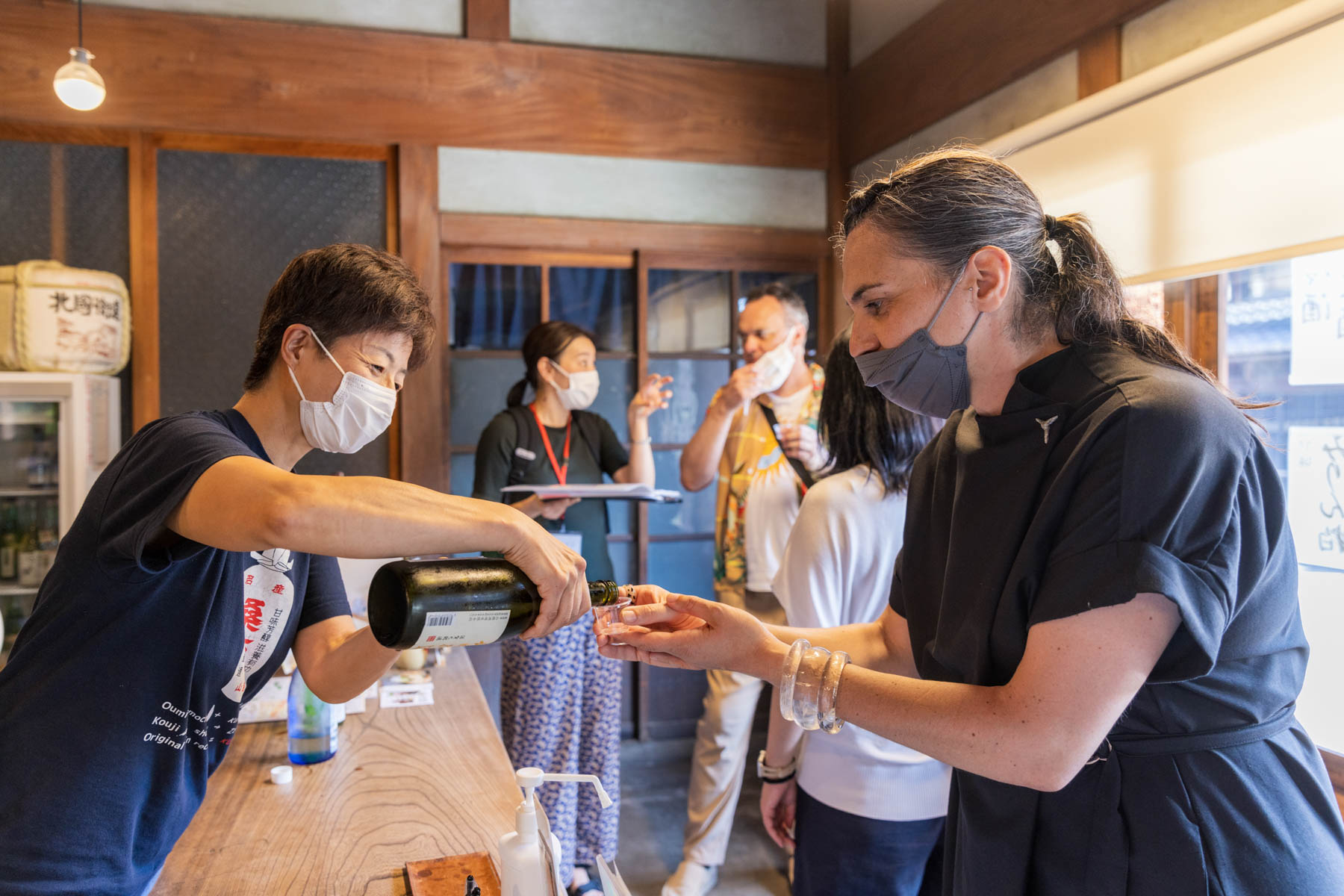 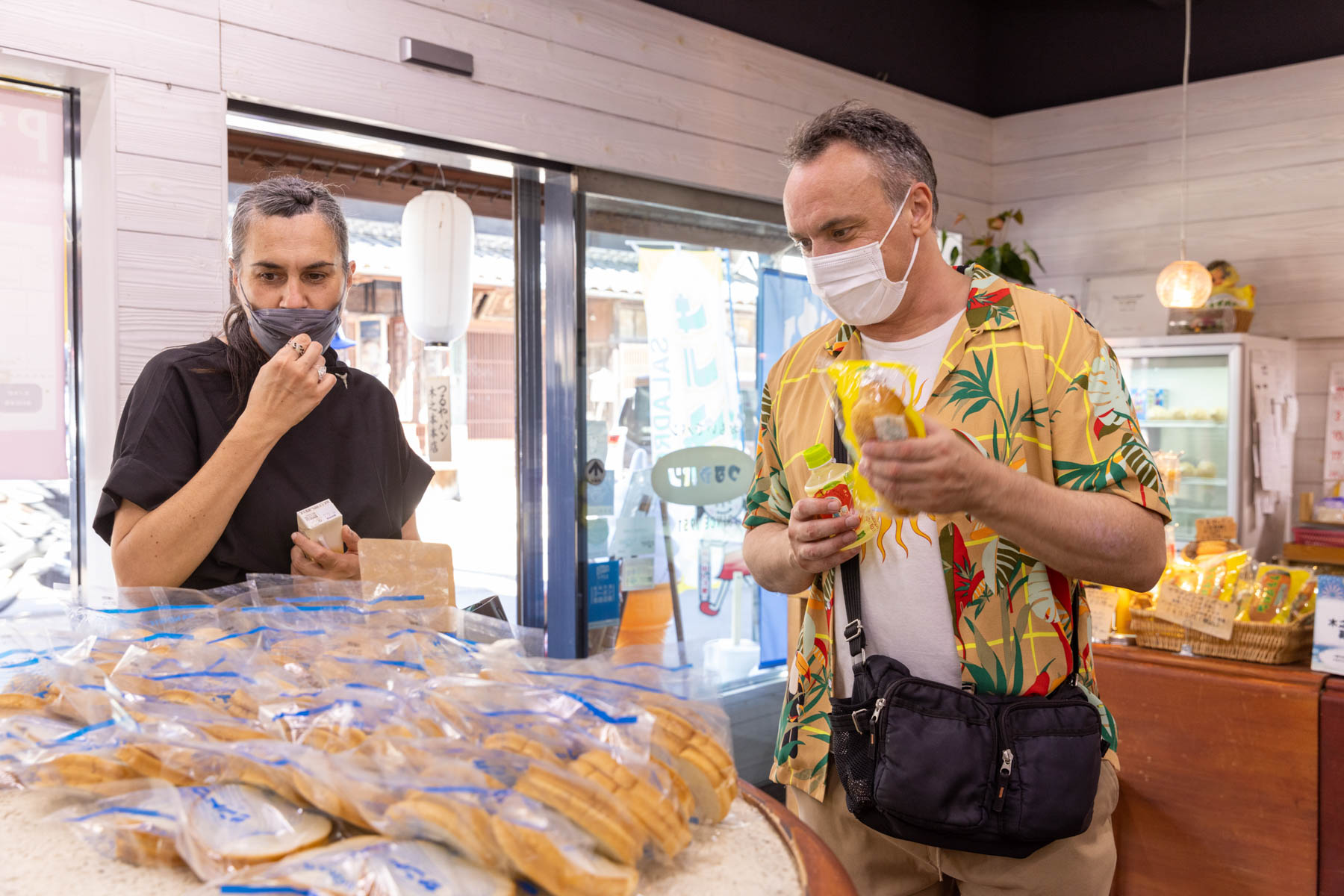 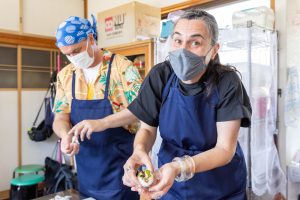 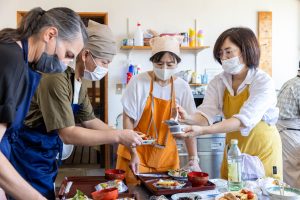 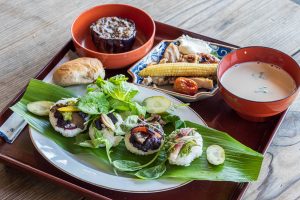 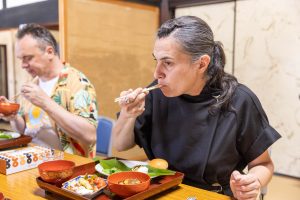 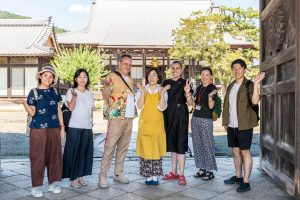 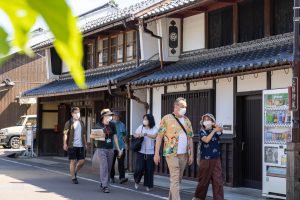 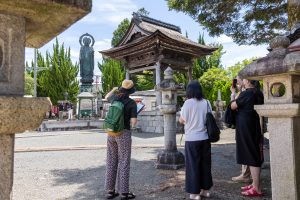 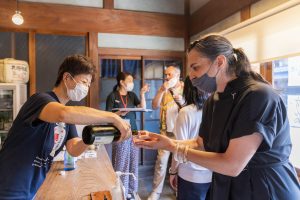 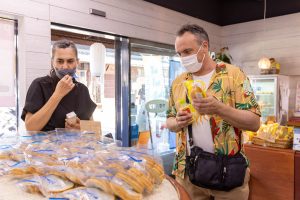 Kinomoto is a charming old brewery town blessed with an abundant local freshwater source. As a former lodging town along a historic Edo period trail, the town has retained much of its original charm without catering heavily to tourism, but rather by sustaining its local family-run business community that has thrived here for centuries.

In this tour, you’ll try cooking local homestyle cuisine at a traditional Buddhist temple of the town, using fresh locally-grown vegetables, and homemade fermented products such as miso and pickles, as well as shoyu and sake from local breweries.

After meeting up at JR Maibara Station (shinkansen stops here), our guide will lead you on a 24-minute train ride north to JR Kinomoto Station. Then, we head to Myorakuji, one of the town’s main temples, where we join a local style cooking workshop from the wife of the temple head monk.

After enjoying the lunch we made together, we’ll go on a walking tour, visiting 1 or 2 sake breweries, both among the 5 oldest operating in Japan, as well as a traditional soy sauce brewery. You may see some of the same ingredients we used in the cooking workshop.

Whereas many sake tours in Japan cater to large groups and teach sake-making basics, our tour is focused more on the actual community and history of these local brewers. So we can meet the staff of these family-owned operations, try samples at a couple of the stops (note: sake and alcohol samples restricted to guests age 20 or older), and aside from the winter brewing season, guests are usually invited to take a peek behind the storefront at the actual brewing areas at two of our stops (Yamaji Shuzo & Daiko Shoyu).

We’ll also visit the area’s other interesting spots, such as a large local Buddhist temple at the heart of local culture, and local shops such as traditional confectioneries and bakeries. Your guide will help you discover all of the local charm of this small, yet bustling traditional community.

We value real local culture. So, we rely on guides who are from the area and have strong local knowledge to guide you. Rather than simply introducing sightseeing spots, guides involved in the community can act as mediators and create opportunities to experience the values and communal ties that have brought prosperity to this charming little town since ancient times. 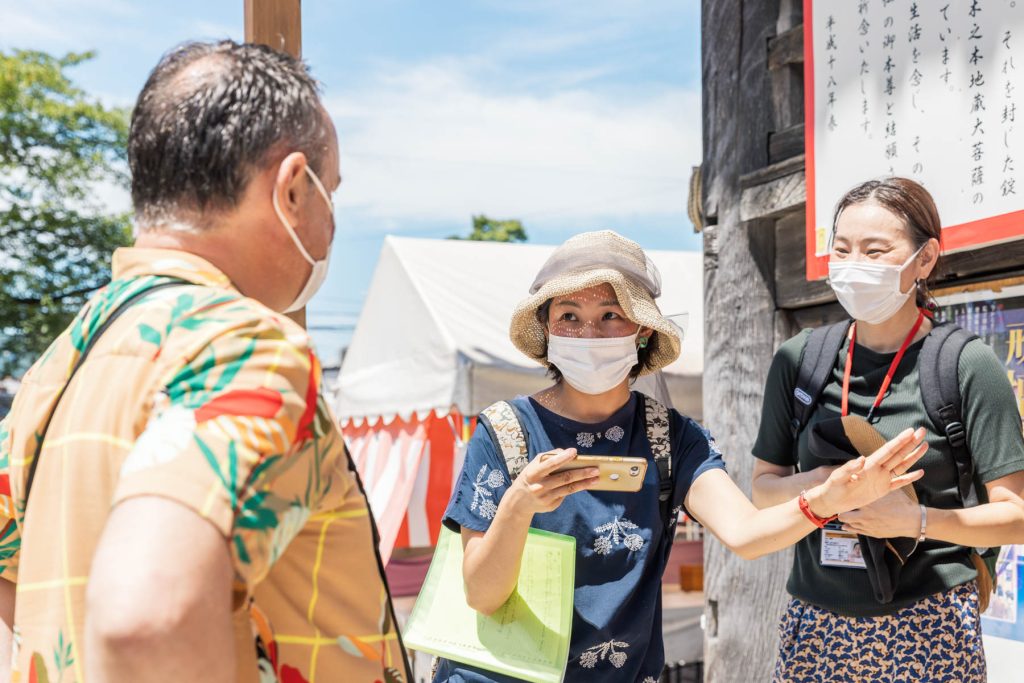 Kinomoto-juku is one of Japan’s shukuba-machi (medieval lodging towns along Japan’s historic travel routes) in Nagahama, Shiga, where some of the original centuries-old traditional businesses are still operating today. Breweries for sake and soy sauce were particularly successful here thanks to an abundant underground source of pure water from the Ibuki Mountain Range. Located right at the junction of North, East, and West Japan, this area has cold winters ideal for sake production, and also served as a shukuba trade hub, with ready access to local ingredients.

Situated on the Hokkoku Kaido, meaning the northern Japan trail, the town embodies a unique blend of northern and central Japanese cultures. Much of this local culture and historical charm is still seen here still today, as it has been largely preserved, including local family businesses which have continued traditional operations, without being transformed into tourist attractions.

This temple was built around 600 years ago, and has since been cared for by 37 generations of head priests. Noriko Fujitani, the wife of the current head priest, together with other women of the community are also engaged in various activities to preserve local area food culture. In particular, they are focusing energy on a local food workshop, introducing authentic recipes of this area, using fresh vegetable, miso, pickles, etc. In this tour, they introduce the depth of local Japanese cooking as well as recipes you can try back at home!

Established in 1852, Daiko Shoyu has been operating as a family business for 6 generations. Kensuke Osugi is the current successor. Most soy sauce breweries now rely on modern production methods, but Daiko has continued using strictly traditional methods, which is quite rare nowadays. At the brewery, you’ll have a chance to sample a few of their sauces, and to learn a bit about which sauces to use for different dishes.

Founded in 1532, Yamaji Shuzo is said to be the fourth oldest sake brewery still existing in Japan. The brewery and storefront both occupy a beautiful old traditional building. Yuko Yamaji, the wife of the current 13th generation successor, provides us with tastings of some of these different sakes in this tour (age 20 and over).

Founded in 1534, Tomita Shuzo is said to be the fifth oldest sake brewery in Japan, after Yamaji Brewery. Their famed sake brand, Shichihonyari (lit. Seven Spears), has won high acclaim both here and abroad and they’re known for integrating a creative edge with respected traditions. The current master, Yasunobu Tomita, believes in local sourcing, making sake with almost all local ingredients from rice to water, for sake that’s both delicious and environmentally conscious. Sake pairing for the tour’s lunch meal is available from this brewery.

Founded in 1951, this bakery sells freshly baked breads, sweets, juice, coffee, etc. Beloved by locals, some locals have been coming here for three generations. The shop was founded by Hidetoshi Nishimura, who anticipated the post-war American influence on food culture, and seeing that the town lacked a bakery, decided to open his own, which soon became a local landmark.

Pricing for this private tour is determined by the size of your group, and any optional activities. Basic pricing is as follows:

Additional fees apply, but vary by time & group size (final cost will be confirmed before finalizing reservation). Please mention in comment field of reservation form to add options, or feel free to ask us for more details about any of them!

When submitting your request, be sure to include relevant details in the comments. We'll get back to you within about 1 business day to confirm availibity, details, and price.

Please also read through our Terms and Conditions for complete details about payment, cancellations, etc.

When and how do I pay for a booking?
We allow, and recommend, payment in person at tour start time. We accept in-person payments by cash (Japanese yen), or major credit card (Visa, Mastercard, American Express, Discover). Alternately, we can arrange for advance payment via secure online invoice in Japanese yen, payable by Paypal or credit card. Note: while we don't require early deposit payment, you may be invoiced to pay any applicable cancellation fee in the event of late cancellation.
What happens if it rains?
We may cancel tours for weather. Bike tours in particular are cancelled for moderate rain or snow. This decision will be made no later than 7pm on the day before tour, so please check your contact email for any updates. In such a case, you will be fully refunded any advance payment. Bike tour weather cancellations are given the option to exchange for a walking tour instead. Walking tours are still conducted in light to moderate rain & snow. Weather cancellations are made at our discretion; if you decide on your own to cancel, then cancellation fees may still apply. See our Terms and Conditions for more details about weather cancellation.
What is your cancellation policy?
See our Terms & Conditions for complete details. Regarding cancellation fees, here's our basic timeline for fees applying to cancellations made by the customer: